Dermatologist Dr. Luis Garza from John Hopkins Medicine is among the 10 most renowned hair loss researchers in the US. Both the general media and myself have not covered him anywhere near as frequently as we have others. Especially the “Big Three” of Angela Christiano, George Cotsarelis and Ken Washenik.

However,  as a hair loss researcher, I respect Dr. Garza more than any other leading scientist. Primarily because he seems to have stuck with one institution for most of his career. And he does not seem to be affiliated with various commercial interests. Dr. Garza is especially well known for his work with PGD2 and hair growth.

Yesterday, I discovered a great recent video interview of Dr. Garza. It only had 508 views at the time of writing this post, so was missed by most people. Youtube has a goldmine of such barely viewed content that does not show up when people sort by view count.

At the moment, the below video has 25 thumbs up votes and 0 thumbs down votes. I agree with this percentage. This is the first time that I have seen Dr. Garza on video, which is very surprising to me.

Among the most interesting parts of the below video include: 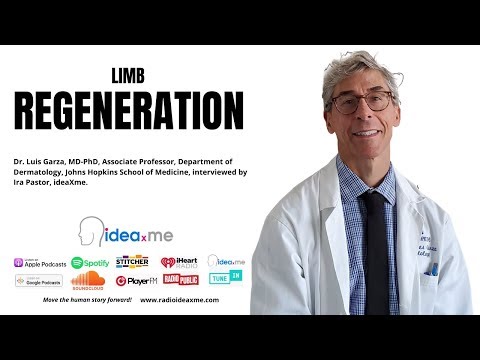 I have discussed Dr. Luis Garza’s work on this blog several times before, mostly related to his important findings about prostaglandin D2 (PGD2) and its impact on hair growth.  Dr. Garza is among the most accomplished and respected hair loss researchers in the world. He works at the Johns Hopkins University School of Medicine.  In fact he has his own named facility there called the Garza Laboratory. The list of projects that his team is currently working on includes several focused on hair growth.

Today, Dr. Garza and his team published an important article in the Cell Stem Cell Journal.  They have found that a protein called toll-like receptor 3 (TLR3) plays a crucial role in the regeneration of damaged skin and hair follicles. TLR3 activates various genes (IL6 and STAT3) and signaling pathways (Wnt and Shh) that are involved in hair regeneration.

It is common knowledge that damaged mammalian skin releases double-stranded RNA (dsRNA), which is then sensed by TLR3. Besides the previously mentioned regeneration of damaged skin and hair follicles, TLR2 also plays a role in activating the immune system.

While most of the main work was done on mice, in a side experiment on humans, the Garza team found that “the expression of TLR3 was five times higher in scratched human skin cell samples compared to healthy skin cell samples.”

My two favorite quotes from Dr. Garza in the article:

It has long been known that skin damage can trigger regeneration.

The clinical translation of this work is promising because work has already started, says Garza. Drug companies are already developing products to activate TLR3 to trigger the immune system, and these same products could be tested to promote regeneration.

My least favorite quote from Dr. Garza in the article (although the “might” in there is encouraging):

He also made clear that the information might not be as applicable to conditions unrelated to scarring or to those whose hair follicles are lost from male pattern baldness.